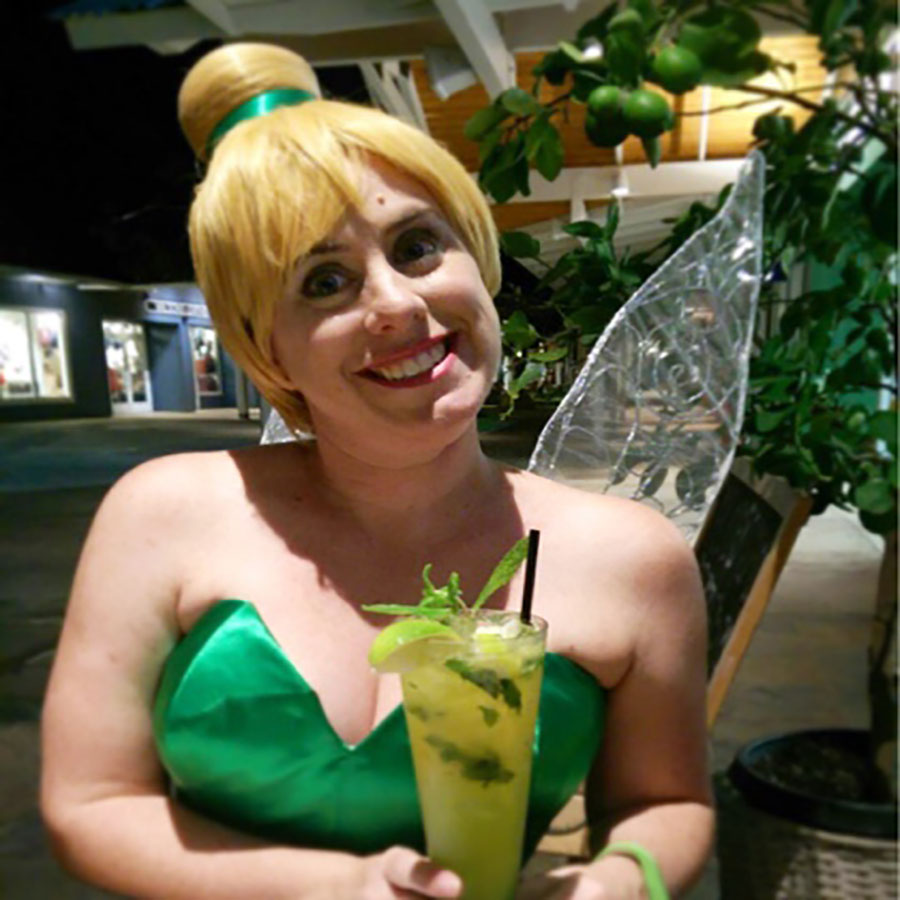 After being a zombie for Halloween for many years in a row (6 I think) doing Thriller all over the island, this year I wanted to do something fun and cute and pretty and very much NOT zombie. So I chose a Tinkerbell costume. 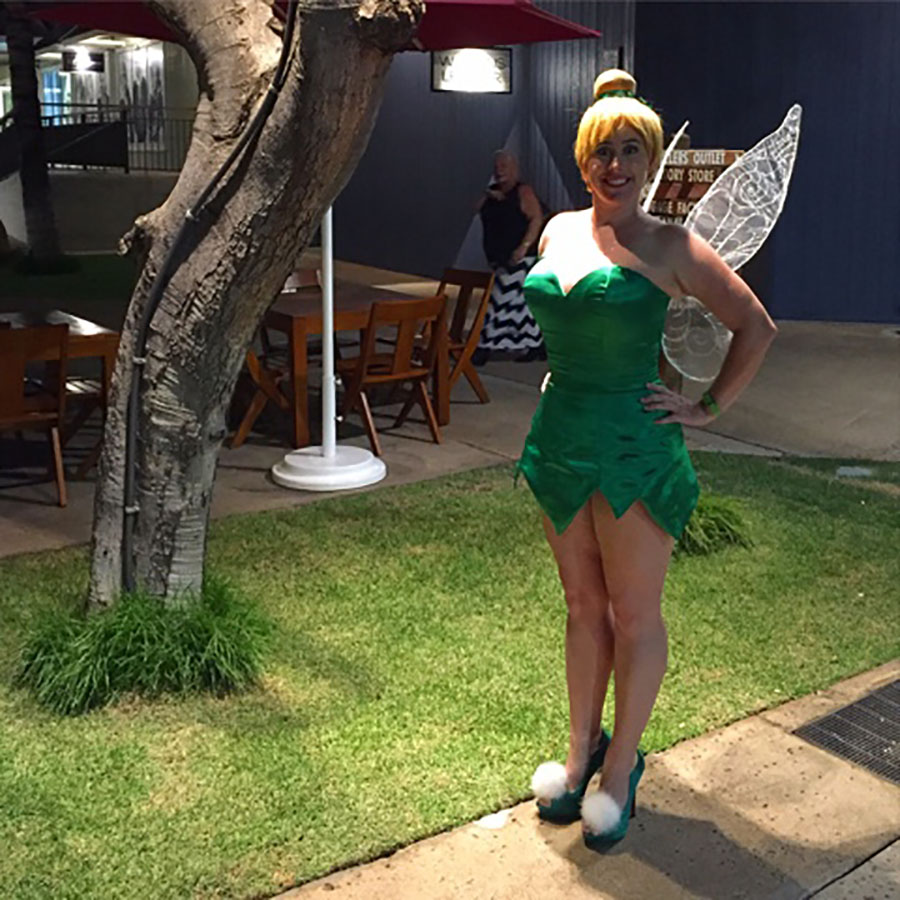 The Tinkerbell costume turned out awesome, though I’d originally had grander plans for it (the wings were going to light up). I ended up not having enough time to do the extras, but I still had a great costume. 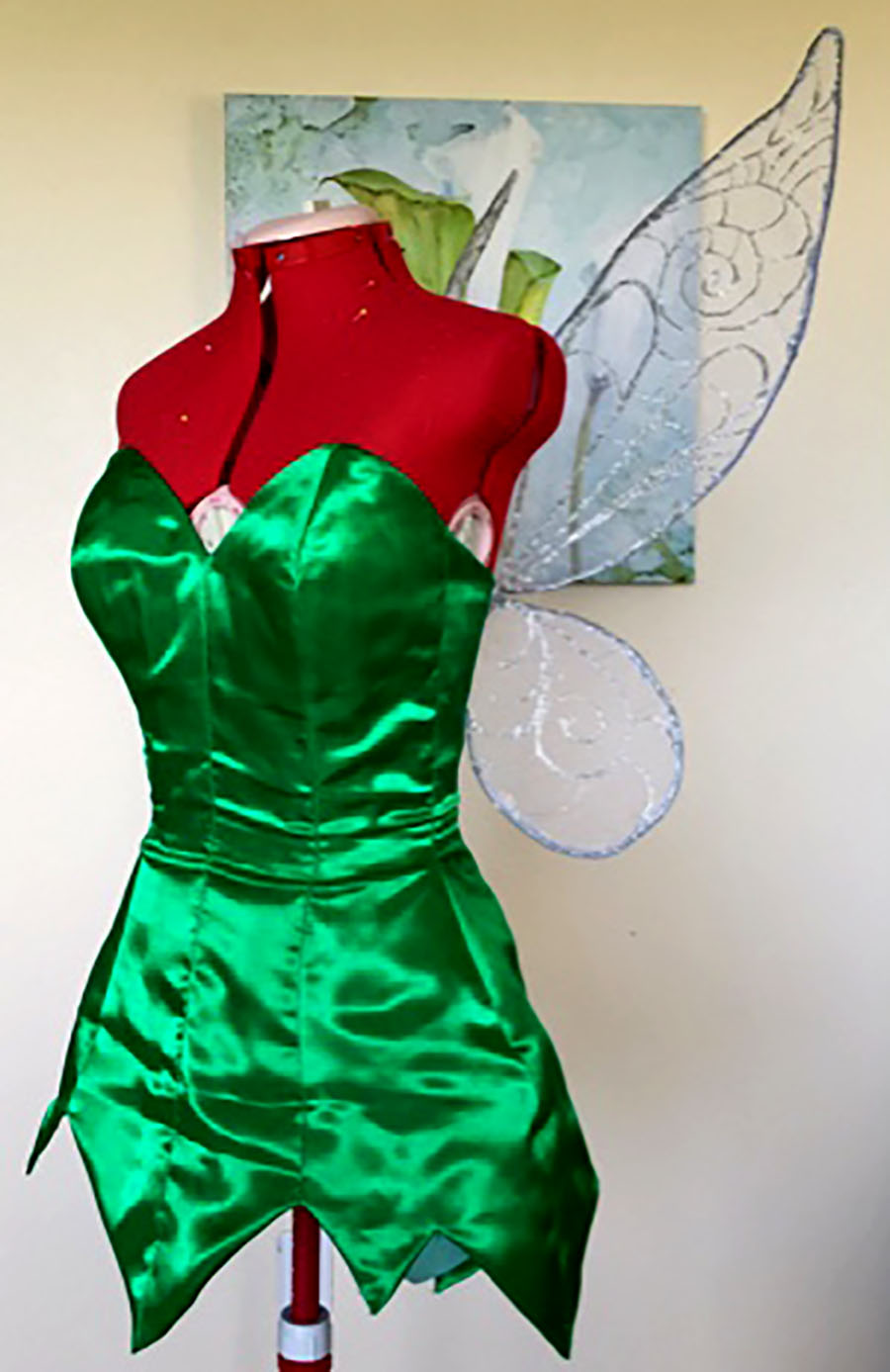 The Tinkerbell costume dress was made from a corset pattern. I just extended it into a dress.

All the corset structure is underneath: 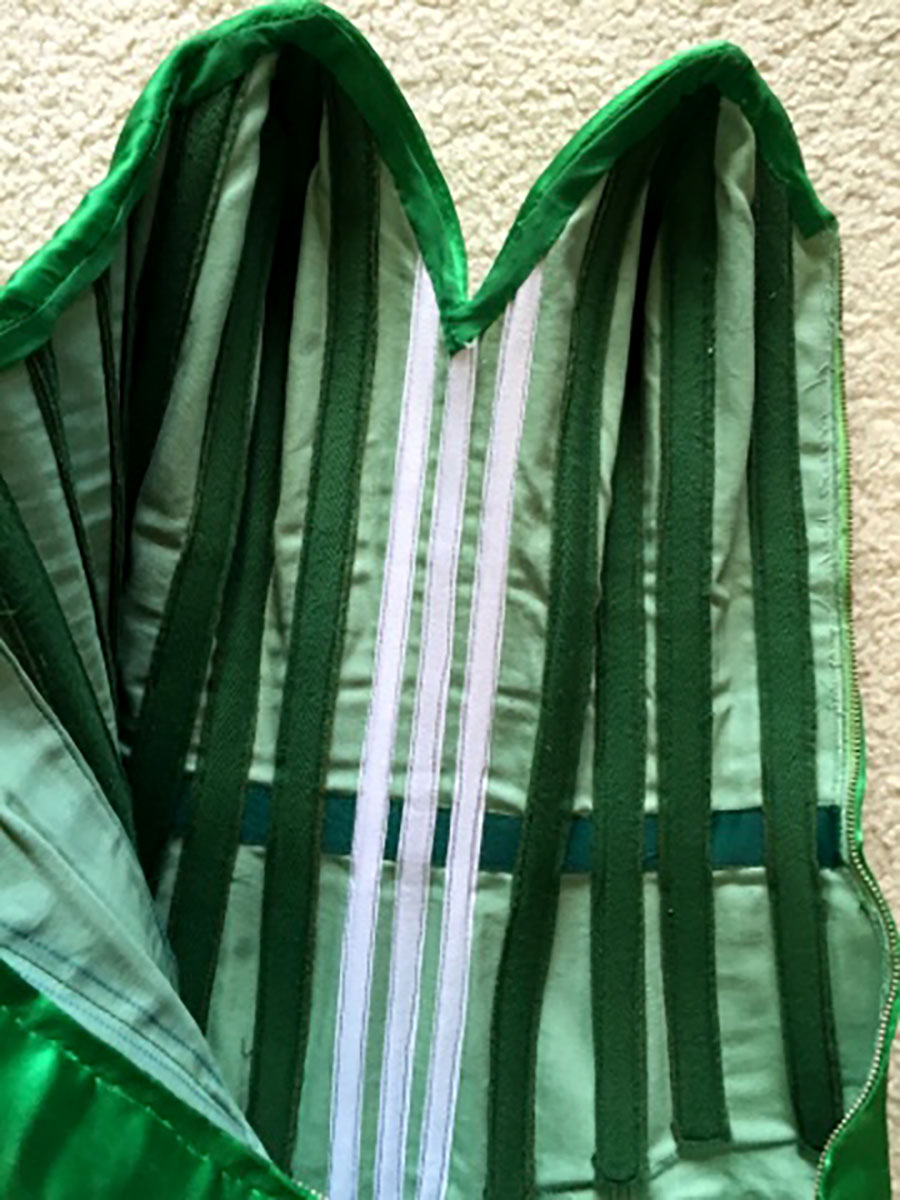 I dyed the coutil – it didn’t come out as green as I would like, but I swear it looked teal while I was dyeing it. Weird. I used flat steel bones for the center front and center back and plastic whalebones for the rest. I also added a zipper on the side since I wasn’t going to have a busk.

One of the challenges while fitting the mockup (toile) was how to do the back – I didn’t want it to lace all the way up from the bottom but I needed someway to cover my bum. I tired just sewing the center back together below the lacing but it did not fit right and kept bunching up in the back. So I ended up making a floating modesty panel that was the same size as the two center back pieces (sorry I didn’t take a picture before I laced it up): 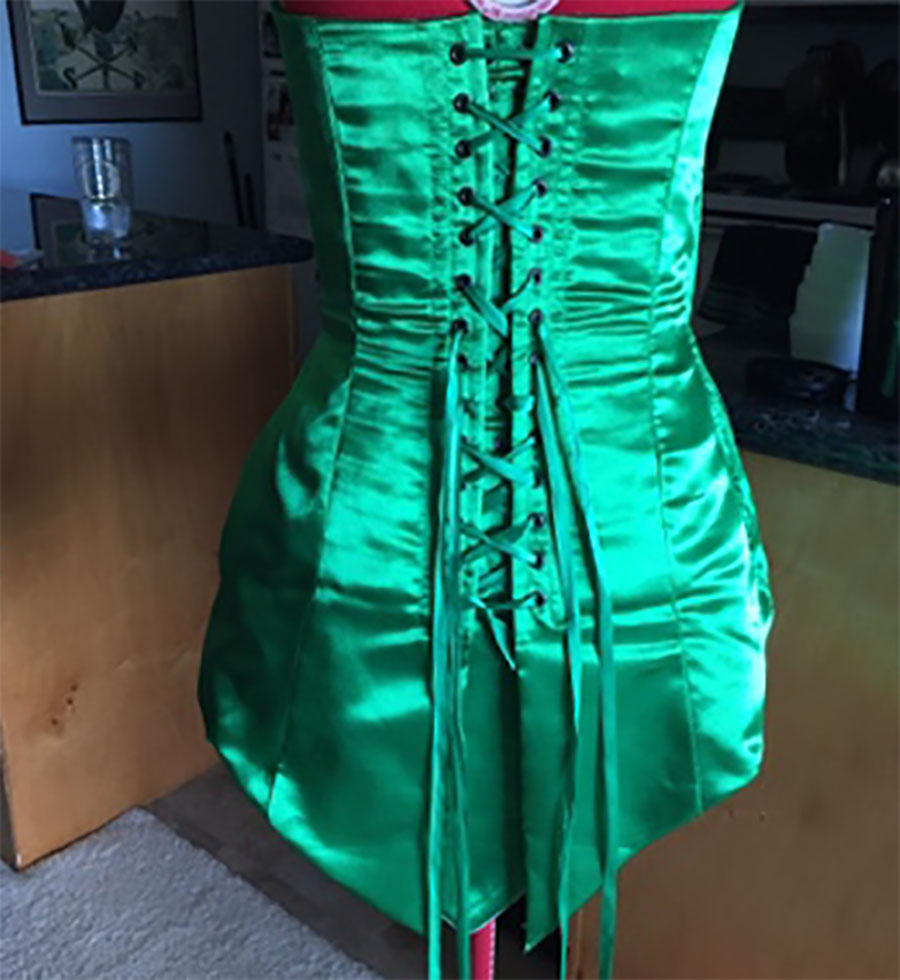 I bought the Tinkerbell costume wig and shoes on Amazon, and the shoe clip-on poofs on Etsy (annemusingdesigns – I had to request them). 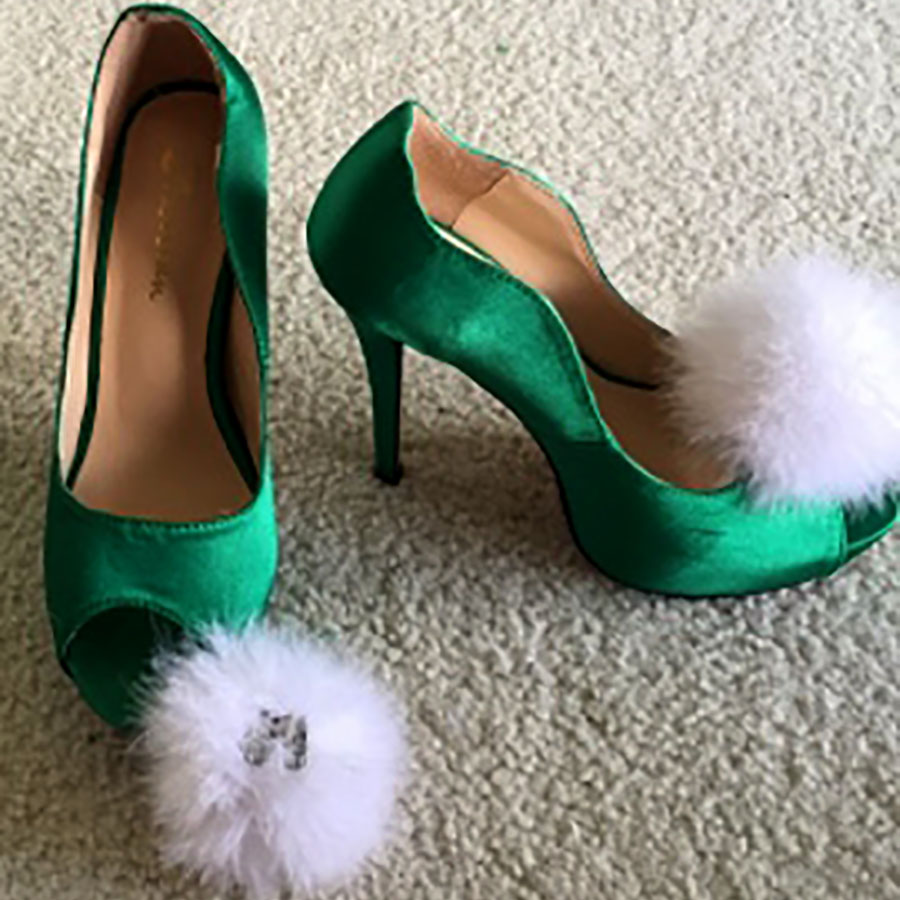 The wings were difficult. I’ve never made wings and they seem like they’d be easier than they were. I’m sure there are some easier techniques, but I had some specific requirements because I had planned on making them light up (maybe someday I’ll get around to it). I had planned on using fiber optics to light up the veins of the wings, so I needed to be able to sew the fiber optics on – so I couldn’t use cellophane (though there are some amazing cellophane wings out there). Also, with the shape I didn’t think that stocking would look right. So here’s what I did (sorry, again no pics of the process – I was in a bit of a rush):

1. Frames: I made the wings out of 12 gauge wire from the hardware store. This is a very sturdy gauge, but it can also be a little difficult to work with. Next time I might try 14. I shaped the wings and then taped the wires together with electrical tape – there’s probably a better, more elegant way, but this worked. I made a U in the middle so I could use my corset to hold it up:

2. Fabric: I used an iridescent organza for the fabric of the wings. I like the look of the organza but it would have been nice to have had a stretch fabric. I hot glued the fabric around the edges of the frame – again, I’m guessing there’s probably a better, more elegant way to do this, but it worked though I did end up with a couple gnarly burns.

3. Decoration: I used glitter puff paint for the design. I had it drawn out on a piece of paper and just traced over the wings with pencil and then added the puff paint. My puff paint was old and kept clogging. It ended up being a little messy. Also, I might recommend a chrome silver rather than a glitter silver, but I already had the glitter.

If I’d had more time I would have covered up the middle section with green fabric or felt so it was a little less visible. But overall, the wings worked out great. They were a little uncomfortable in one spot, but I think if I fiddle with the wire I might be able to fix that.

Things I’ve learned and things I might do different:

1. Boning: I might have shortened the boning a bit at the center front. It was exceptionally hard to sit in and almost impossible to drive in.

2: Lining and casings: I think it might have looked better if I had done a lining instead of individual casings. Probably would have been easier too.

3. Fashion fabric pattern: the fashion fabric was a little too long in the waist. The structure fit fine, but I ended up with a roll in the green satin. I need to remove maybe a quarter inch at the waist for the outer fabric only.

4. Zipper: I put the zipper on the wrong side. Oops. I also upgraded zippers halfway through. I started with a nylon zipper and it wasn’t strong enough so I got a metal one instead.

5. Wings: like i said, there’s probably better, more elegant ways to make the wings, but I’m not entirely sure what they might be. If you have any ideas, suggestions, or experience, please let me know. 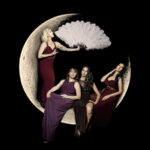 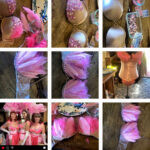 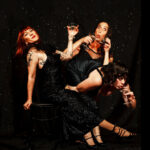